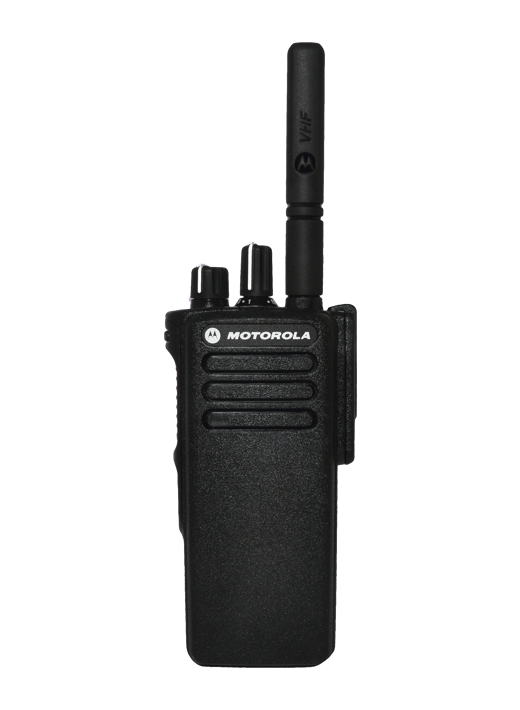 For several years, Motorola’s MOTOTRBO range has helped set the agenda at the cutting edge of digital two way radio technology. Now, with the latest E-Series release, Motorola has once again set new standards in adapting two way radio to meet the needs of business and industry in the 21st Century.

The DP4400e is a high quality non-display model boasting crystal clear audio, enhanced by the latest IMPRES amplifier system, intelligent volume control and SINC+ noise cancellation. The sum effect is, no matter what environment you are working in or how much background noise there is, DP4400e calls can be heard loud and clear.

Thanks to a redesigned antenna, the DP4400e also boasts 16 per cent better signal coverage than its predecessor, and thanks to the new IMPRES smart energy system, a maximum 29 hour battery life. It is also a handset built to withstand day to day knocks and accidents, with an IP68 rating for dust and water resistance.

Revamped data connectivity includes Bluetooth 4.0, which can be used for indoor location tracking when paired with beacons as well as for connecting with wireless accessories. The handset can connect to WiFi for remote firmware updates, and there is also much enhanced multi constellation satellite tracking with support for the GLONASS as well as GPS systems.

Text messaging can be used when voice communication is not appropriate. Controllers can send tickets to individual users or allocate specific tasks to be completed, and make private calls to individuals rather than having to broadcast across the entire network.

Staff working in hazardous situations can use the Man Down and Lone Worker features for extra peace of mind. Man Down uses an accelerometer to detect falls and issue alerts automatically, while Lone Worker is a monitoring system which requires users to check in with colleagues at fixed intervals.